Laura Diamond – a resident of Stow and a physical therapist spoke on “Aquatic Practice Management” at a national meeting of the American Physical Therapy Association. The gathering was held  in San Antonio, Texas.

The owner of Diamond Physical Therapy Associates, she founded the organization in 1993. Specializing in water therapy techniques, she practices at locations in Concord and Sudbury, Massachusetts.

For more than 25 years she has been involved in the field of aquatics, serving as an Aquatics Director, Instructor, Consultant and Practitioner. Her training includes work with therapists at the Brigham and Women’s Hospital in Boston and the New England Rehabilitation Hospital.

In the March 2000 issue of the Physical Therapy Magazine, she was featured in an article about building a successful private practice. 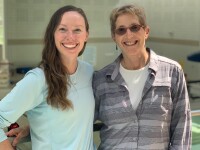 Dr. Gray Cohen has an accomplished resume in the world of aquatics as a lifeguard,… 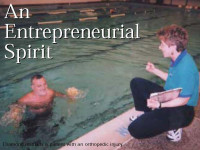 There are people who ask themselves "Wouldn't it be nice to do X," all the…

Carving Out a Niche

How to begin a specialized private practice in aquatic therapy. Do you dream of owning…